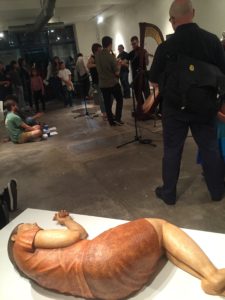 Talk about transforming the space!  Sachiko Akiyama’s opening night was terrific, the last time I experienced an intimate opening like this was at Red Lion Theater in Islington 20 years ago(experimental theatre). The combination of Sachiko’s  sculptures with a combination of performers coming through the space created a welcoming and unexpected way to experience the work-  both through sound and vision.

I arrived a little late and had to squeeze through the people to look at Sachiko’s  hand crafted wooden sculptures. People were scattered all over the gallery and it was fun trying to figure out where here sculptures were. Some blended in with the visitors sitting on the floor, others surprised you while you were walking through. 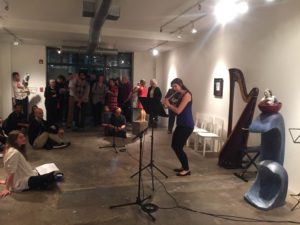 This wave one on the right was one of my favorites. It was playful, whimsical almost with bright colors. A little figure riding a wave in a noodle bowl? I wasn’t sure what it was and then started thinking about whether the figure was Japanese…what was it’s identity. Did it matter…come to think of them they kind of looked Asian. Then I started thinking about the migrant experience we have globally how so many people are displaced and are dying trying to cross ocean. By this time the harp player came in and did some of her magic, transporting us to some other magical place through music. I felt like a kid in a candy store, so many exciting things to look at and listen too.

My favorite part of the Chimera performance(Boston based collective)was when what I call Philip Glass/John Cage influenced musicians performed. The lights were dimmed and all I could see was a small light on the music sheets and shadows on the floor. Sachiko’s  life size sculpture on the floor had now taken on another presence. Since we couldn’t see the hand carved details on the sculpture it became a  life like thing, almost scary. I kept watching it to see if it would move, luckily it didn’t and I could focus on the musicians in the dark. Well kind of, the violins made the sounds and now I was looking at the shadow. Love what sound, performance and art can do..just moves you to different space!

I was excited to chat with Sachiko Akiyama about her work and asked her about the wave sculpture. Yes, it referenced Japanese culture, made hints at Hokusai ‘s wave, and also children’s story book characters. “I want them to have many meanings and viewers’s should be able to interpret it their own way.”  Most of the portraits she sculpts are family members with some sort of narrative. The delicately carved wooden objects have a warm exterior that call you close. I enjoyed the sculptures since they were both playful and thought provoking at the same time. 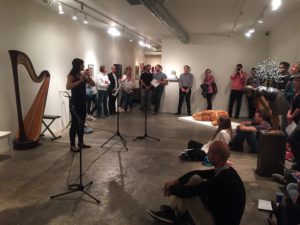 I was of course delighted to chat with show curator’s Nina Nielson and John Baker. I hadn’t seen them in ages and it was  good to catching up.  We talked of course about swimming in cold water(our favorite fall activity), Sachiko Akiyama’s amazing work and this terrific show they pulled together. So glad they are out and about sharing their special talents and organizing a terrific show. Thanks for the invite Ian an amazing evening!