Went to Faneuil Hall  to learn about Biomimicry as a part of Boston GreenFest.

Looks like I need to do more research into this interesting subject. Sounds like biomimicry is looking at nature, structure, and patterns for ideas on strategies for designing new procedures and products. Check out:

Thought the Bird Glass created by Ornilux was fascinating. Every year millions of birds are killed flying in to windows of buildings. Spiders weave their webs that reflect ultraviolet light , which birds can sea. Arnold Glass developed a UV reflective glass coating that is transparent to people but visible to birds. What a wonderful  solution! 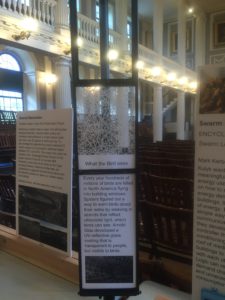 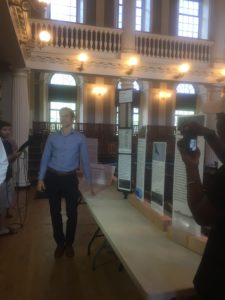 Spirals are an ancient symbol loaded with all sorts of life related context. Here the “Moving Water Project by Pax Water Technologies put a new spin on the spiral. They created an impeller shaped in a three dimensional spiral inspired by nature. Jay Harmon created the spiral to move fluids in water tanks this way..this reduced the energy used to maintain 85% of the water quality.  Before still water would sit in water tanks and get nasty with the bacteria growing on it, they would have to disinfect it with lots of chemicals. This spiral system of stirring the water in the tanks helped generate better water quality for less money and reduced the chemicals needed to disinfect the water. 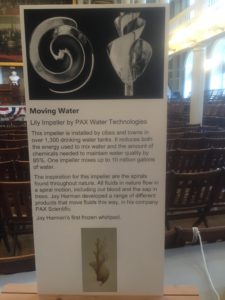 The next thing I found fascinating was the Wellfleet harbor Oyster restoration project under the direction of Dr. Anamarija Frankic director of the Green Harbors Project.  A single mature oyster can clean over 50 gallons of water per day. Oysters also increase biological diversity and improve coastal resilience. The project restored 5.8 million oysters in Wellfleet Harbor. How Cool!