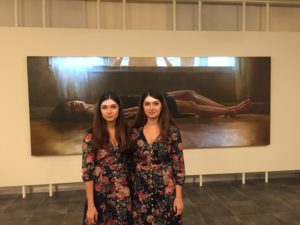 I had not planned on popping into Adelson Galleries on Harrison Ave on my way home from the studio. The lights were on in the gallery and people were moving around, I decided to take a quick look, so glad I did!  I was intrigued to see the large scale figurative paintings that had something mysterious going on with them.

These dark realistic figures had taken over the room. Painted in low key values, they resembled movie stills; snap shots of some larger narrative. I loved the drama in them! Then I started noticing small movement on the canvas..now I had to go up closer to see if there was a video behind the painting or something else. As I got closer, I saw almost another shadow move across the surface of the painting. That’s when I decided to look up. Yep, there was a projector-  so video projections were placed delicately over the paintings to create subtle shifts in perception. So clever!

Farzaneh and Bahareh Safrani, from Tehran, Iran,  have been collaborating since they were thirteen years old. I like the fact that they painted each other, created videos of each other and projected them on to these paintings of themselves. The self, as the individual coming in to question.  The nudes in their paintings are barely covered in black cloth making suggestions to the burkas worn in Iran. Their work questions sexuality and identity in a refreshing way.